‘Alfred’s War opens our hearts to the contribution and sacrifice that Aboriginal and Torres Strait Islander veterans made to Australian’s war efforts.’ 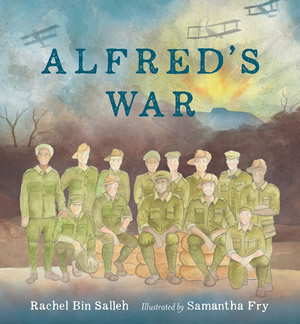 Alfred is a first Australian who lives outside, sleeps on park benches and under trees. He enlisted in the army as a young man and sailed off to fight in the first world war. His comrades meant a lot to him, and even when he returned home after the war he often thought of them. They even appeared in his dreams. Alfred’s War is not the same as other the men’s war, as he is one of the forgotten soldiers, one of the unnamed men.

There is a double-page spread at the end of the book that explains how Aboriginal and Torres Strait Islanders were enlisted to fight in wars that Australia has been involved in.

Alfred’s War highlights the lack of recognition of the Australian Aboriginal and Torres Strait Islander servicemen. While they were afforded equal pay and were considered equal among their mates, their service was not acknowledged upon their return. It is only more recently that their service and sacrifice has been acknowledged.

This site uses Akismet to reduce spam. Learn how your comment data is processed.